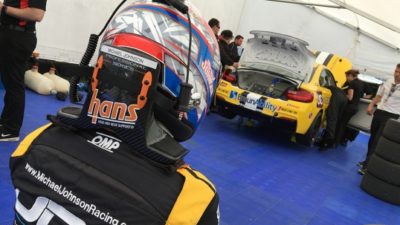 “I’ve just spent the week testing outside of Chicago, at Blackhawk,” Johnson said, “and I couldn’t be more ready to take on Watkins Glen. I feel more than prepared; I feel extremely confident.”

“We had so many car issues at Laguna,” Johnson said. “We were just happy to get the car on the track! I feel like Watkins Glen is really our chance to make our presence known this season, and show everyone what we’ve got.”

Johnson didn’t race in the first two competitions of the season, due to his modified car not being completed in time. His race car is specially equipped with hand controls, provided by GuidoSimplex. Johnson’s car features a complicated brake, gearshift and throttle system, with which Johnson uses his hands to control systems other drivers manipulate with their feet.

“Johnson continues to impress with his relentless drive and positive attitude,” said team owner John Church. “He is a fierce competitor and we can’t wait to get him back on track at Watkins Glen.”

The weekend’s race at The Glen will challenge the drivers on the 3.4-mile course during a race that will last two hours and 30 minutes before the checkered flag will fly. Johnson is of course paired with teammate Stephen Simpson, from Cape Town, South Africa, in the Street Tuner (ST) class. Practice for Johnson and Simpson begins on Thurs., June 30 at 3:00 p.m. Qualifications will be on Fri., July 1 at 1:25 p.m. with the race to be held on Sat., July 2 at 12:25 p.m. All times Eastern. The race will be televised on a tape-delayed basis by FOX Sports, and but will be streamed, live, on IMSA.com.