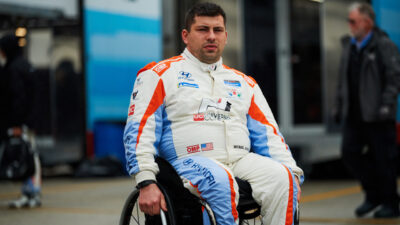 Michael Johnson, 29, competes in the IMSA Michelin Pilot SportsCar Challenge behind the wheel of a Hyundai. Michael was the first and only paralyzed driver licensed by INDYCAR, before making the switch to sportscar racing beginning in 2016.

In 2005, Johnson went from a pro motorcyclist, with 14 national titles to his name, to then cart driver and eventually to the Continental series due to an extensive injury that paralyzed the rider.

He was only 12 when he was involved in an accident, as he moved into the lead, going into the last lap at a half-mile dirt track, while racing his motorcycle. He broke his collarbone, right ribs, left ankle and left leg. He also fractured the T5 and T6 vertebrae in his back, which caused paralysis. He currently has four rods and 15 screws in his back, after undergoing an 11-hour surgery. In 2009, he had stem cell surgery in Portugal and currently follows an aggressive training program.

Johnson considered the incident a bump in the road, and has continued his mission of being a professional racing driver. Today, he drives his specialty-equipped racecar with hand controls, and turns heads when he rises from his racecar to climb into his other
set of wheels – his wheelchair.

If you take anything away from meeting Johnson, or hearing his story, it’s that anything is possible. Johnson took the cards life dealt him and is doing things most able-bodied people only dream of.

For his impressive career and athletic determination, Johnson was inducted into the Athletes with Disabilities Hall of Fame and received the Spirit Award in 2012.

In 2015, Johnson was to compete in his second full season in PRO MAZDA before a March practice incident during the first practice session of the season on the Streets of St. Petersburg, sidelined the driver for nearly four months. He returned in August at Mid-Ohio SportsCar Course for two events and raced in the final two events of the 2015 season at Mazda Raceway Laguna Seca. Not long after his 2015 season, he announced at Road Atlanta during the final race of the IMSA SportsCar season during Petit Le Mans his intensions to switch to sportscar racing.

His 2016 racing season and career in sportscar began at Mazda Raceway Laguna Seca (April 2016) on the heels of winning the Michigan Governor’s Council “Accepting the Challenge” award.

While Johnson is obviously paralyzed, he isn’t a disabled young man in the racecar. He’s as motivated and capable as any racing driver to compete, and is determined to prove how deserving he is of success.

In 2005, during Johnson’s stay at Children’s Hospital of Michigan, he and his family attended a lecture by Dr. Carlos Lima of Portugal, a neurologist doing pioneering work in the regeneration of the spinal cord. Dr. Lima’s work involves harvesting stem cells from a patient’s nasal cavity and transplanting them to the sites of the spinal cord break, in an effort to help regrow lost neural connections.

“Because of Michael’s age, Dr. Lima’s team didn’t want to do the surgery, immediately. They wanted to make sure nature had done everything it could to bring him back, first.”
Tim Johnson, Michael’s Father 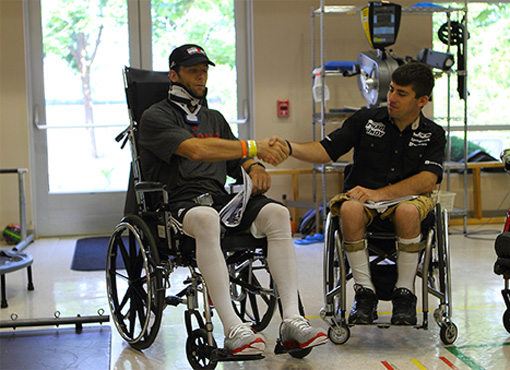 So the Johnson family stayed in touch with Dr. Lima and, eventually, met all the conditions for the surgery. The stem-cell transplant procedure was performed on Johnson on Sept. 11, 2009. After surgery, Dr. Lima suggested Johnson continue the recovery process at Walk the Line, a physician-directed training program for patients with spinal-cord injuries.

Johnson has begun going three days a week to Walk the Line, where certified trainers worked with him on an exercise-based program, designed to activate muscles and nerves below the level of injury. Most exercises are done in weight-bearing positions, so that the spinal cord can begin to recognize signals and regain function.

“We’re very much encouraged by the progress so far. In terms of racing, it would be very helpful if Michael could regain feeling in his back and hip areas, so that he can feel the vibrations in the race car better, and he can race more efficiently.”
Tim Johnson 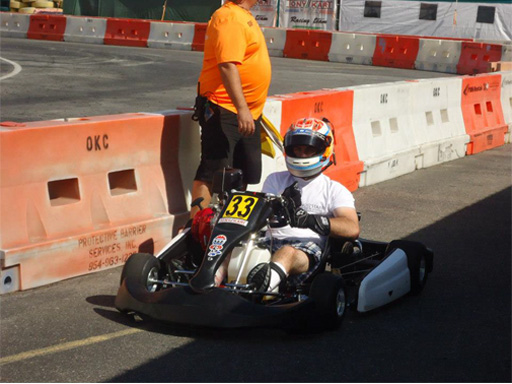 Johnson spent nearly a year engaging in treatments, including skin grafts for pressure sores, before doctors gave him the okay to participate in physical activities.

His father purchased a go-kart with secured hand controls, originally developed by CART champion Alex Zanardi, who returned to competition after a crash in 2001 that resulted in the amputation of his legs. On Christmas Eve in 2006, Johnson got into a go-kart and drove around the parking lot of his father’s business.

As a result of a successful parking lot test, Johnson raced the go-kart, in 2007, at the East Lansing (Mich.) kart track, taking first place in the Junior SuperCan class and earning “Driver of the Year”.

The following year, he finished first in the Rotax Junior class in Michigan and qualified for the Rotax Nationals in Wisconsin. Then, in 2009, Johnson moved up to the Great Lakes Pro Series and scored six first-place finishes in the Rotax class, as well as 12 podium finishes in the Tag and Pro classes.

Johnson says his experience with motorcycles helped him adapt to hand controls.

“It’s not too different, since I had to use my hands for the clutch and throttle on the bike. I can feel some parts of the kart, but I can’t feel the front when it starts to push. I spend extra seat time in the kart to figure things out.”
Michael Johnson

By 2002 and 2003, Johnson had participated in a number of riding schools and was beginning to compete, not only on a regional, but on a national level in the Kawasaki 65cc and CR85cc classes.

On his 12th birthday in 2004, he raced a Honda CRF 150cc to third place in the Junior Red Riders Supermoto Challenge for competitors aged 12-16 in Reno, NV, which qualified him for the national Red Riders Challenge Final in Las Vegas, where he finished ninth. With that encouraging finish, Johnson went into 2005, aiming to win the Supermoto Championship. 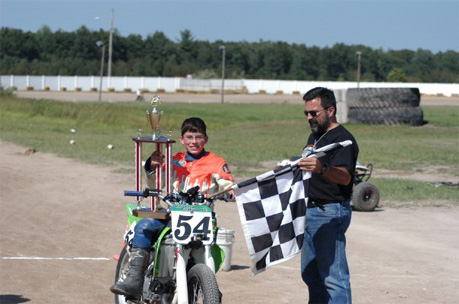 In total, Johnson won fourteen national championships by the age of 12.

“I’m never going to give up. Racing is my life.”
Michael Johnson

In 2012, Johnson drove a full season in the Cooper Tires USF2000 Championship Powered by Mazda series, finishing 15th during his rookie season. The season included a best finish of 10th at Road America, earning Johnson the Tilton Hard Charger Award for advancing 18 positions. 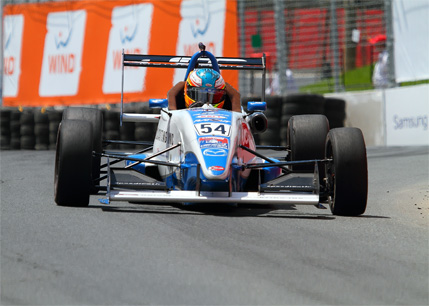 The series is the first step in the “Mazda Road to Indy” development ladder system that was introduced by the IndyCar Series in 2009, and is designed to advance career-minded drivers to the VERIZON IndyCar Series and Indianapolis 500.

In 2014, Johnson moved up to the Pro Mazda Championship Presented by Cooper Tires, where he finished 13th for the season. He was set to return to the series in 2015, before a practice incident at the season-opener on the Streets of St. Petersburg sidelined the driver for much of the season. He did however compete in the final four road course races of the season before announcing a switch to sportscar racing for the 2016 season and beyond.

In 2017, his first season on the sportscar circuit, Johnson competed in 10 races in the Continental Tire Sports Car Challenge (ST Class), placing 13th in the point standings.

The 2018 season proved to be not only highly successful but also historic. Overcoming a broken leg suffered at Daytona in January, Michael Johnson provided one of the most memorable and emotional moments in IMSA Continental Tire SportsCar Challenge history at Lime Rock Park in Lakeville, Conn. when he captured the racing world spotlight by winning his first professional race.

In addition to the win at Lime Rock, Johnson posted four runner-up finishes, two third-place showings and two fourths, placing fifth in the points standings for the championship of the Continental Tire SportsCar Challenge (TCR class) in 2018.

The 2019 season began in storybook fashion with a record-setting performance. In qualifying for the BMW Endurance Challenge at famed Daytona International Speedway, Johnson made history once again, breaking the TCR course record and securing the pole position.

Months later, Johnson came tantalizingly close to repeating as winner of the Lime Rock Park 120, finishing second by just 3.325 seconds. He would then find some love in Virginia, earning his second podium finish of the 2019 IMSA Michelin Pilot Challenge season at VIRginia International Raceway.

To start 2020, Daytona International Speedway once more took center stage in Johnson’s career. At the Roar Before the Rolex, a three-day event that featured six practice sessions, Johnson’s teammate, Stephen Simpson, broke the two-minute mark during the final practice, topping the TCR class at 1:59.846 (106.932 mph) for the weekend.

Later that same month, Johnson raced to a third-place finish at the BMW Endurance Challenge at Daytona to officially kick off the 2020 IMSA Michelin Pilot Challenge season.

In September, Johnson snapped a streak of rough luck at the Mid-Ohio Sports Car Course and concluded the season on a high note, earning his first podium finish at the locale, securing a third-place showing. 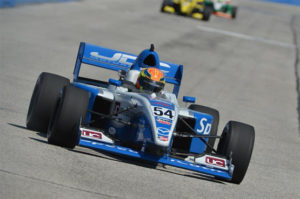 Johnson is inspired by many trailblazers, including Alex Zanardi, an Italian racecar driver and paracyclist, who returned to competition in the aftermath of his own career-changing crash.

He also counts NASCAR superstar Danica Patrick as one of his inspirations, who broke the gender barrier by becoming the first woman to lead the Indianapolis 500 and win an IndyCar race.

A major part of Johnson’s opportunity to continue his dream of becoming a professional racecar driver includes the stem cell surgery he had in 2009.

There has been much discussion, regarding stem cells and it is important to dispel any negativity towards stem cell therapy and surgery. There have been major advancements in spinal cord injury treatments and the opportunity to share Johnson’s story is important to him, for it may help others considering stem cell surgery. 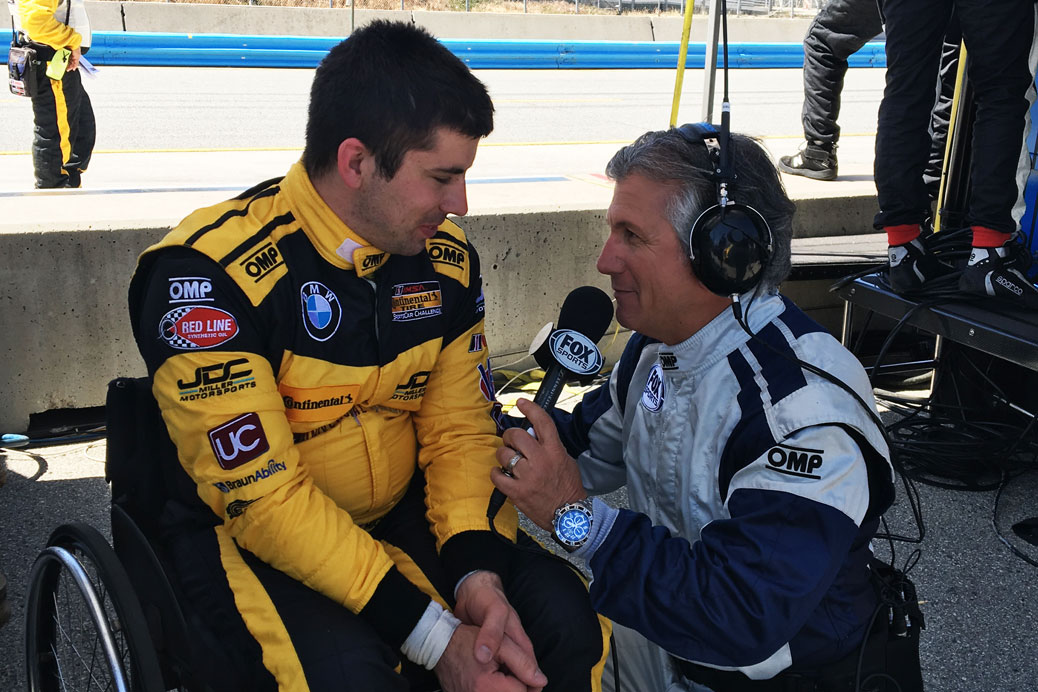 After Johnson was paralyzed in 2005, his family was charged with the daunting task of sorting through options to improve his quality of his life and to help him be as independent as possible. Stem cell surgery seemed the best option for Johnson’s recovery.

Johnson’s stem cell surgery was performed in Lisbon, Portugal because the Food and Drug Administration has not yet approved this type of surgery in the United States. 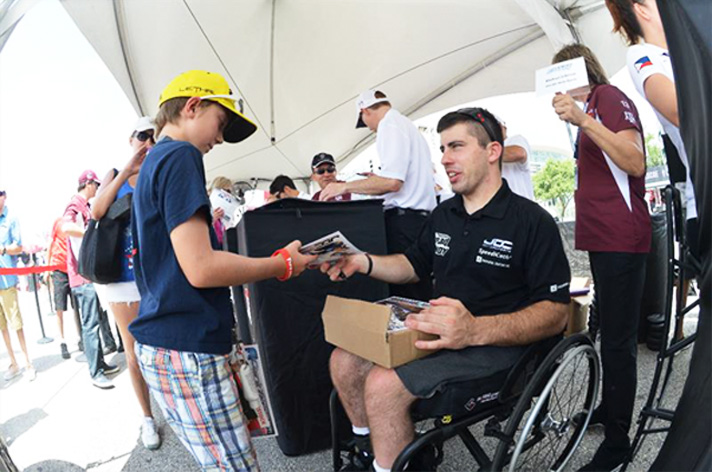 Stem cells are cells that have the ability to divide and develop into many different cell types in the body and can also help repair the body by replenishing cells that are damaged from disease, injury, or normal wear. In Johnson’s case, olfactory tissue, which includes stem cells, was taken from his nasal cavity and transplanted to the injured area of his back.

Olfactory tissue has remarkable regenerative potential to rejuvenate the spinal cord. His stem cell specialist and surgeon, Dr. Lima, told him that his tissue contained approximately 400,000 stem cells, and four million neurons and other supporting cells.

Based on the American Spinal Injury Association impairment scales for measuring spinal cord injury, Johnson was classified as a T5-T6 paraplegic (middle of chest). Now after his surgery and intensive training (5 days a week, for 4 hours a day), he is classified as T7-T8 and shown remarkable improvement in lower extremities such as core and balanc

Many people ask Johnson what he expects from this surgery and his rehab.

“I expect to walk again, and I will. However, in the interim, I am regaining feeling in my hips. I feel temperature changes in my legs. I can contract my lower abs, hip flexors, quads and hamstring muscles. This is all due to the surgery and rehab, as well as hard work. I am currently walking with a walker in my training sessions. I feel the difference and I will not give up!”
Michael Johnson

It is important to point out that maximum restoration function requires aggressive rehabilitation. It is not a quick fix, and Johnson is dedicated to doing what it takes. It is also important to mention that Johnson did not use controversial embryonic stem cells. Stem cells harvested from his own body were used for the procedure.