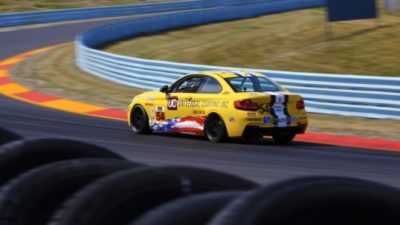 WATKINS GLEN, NY, June 27, 2017 – American paralyzed BMW driver Michael Johnson is looking for consistency going into back-to-back racetracks where he’s raced his BMW 228i M Sports in the past. This weekend’s contest will be in the Continental 120 at the Glen within the IMSA Continental Tire SportsCar Challenge. His first car win also came at the track in 2009 in Skip Barber.

“I'm very excited to get back running at Watkins Glen this weekend,” said Johnson. "I've had great success here in the past with my first win in a car so I'm hoping to do that again this weekend with Stephen Simpson. JDC-Miller Motorsports has put a lot of work in on this BMW 228i M Sport since Circuit of the Americas so I feel ready to go!”

Early last month, Johnson made a return to the Circuit of the America’s (COTA), which was the first repeat track for the 24-year-old motorcycle racer turned open-wheel racer turned sportscar driver. His return to rural New York at the legendary Watkins Glen International is extra special as it will be the first race of the season he’ll be driving to from his home in Michigan.

Johnson’s car is specially equipped with hand controls, provided by GuidoSimplex and features a complicated brake, gearshift and throttle system, with which Johnson uses his hands to control systems other drivers manipulate with their feet.

The weekend’s race at The Glen will challenge the drivers on the 3.4-mile course during a race that will last two hours before the checkered flag will fly. Johnson is of course paired with teammate Stephen Simpson, from Cape Town, South Africa, in the Street Tuner (ST) class. Practice for Johnson and Simpson begins on Thurs., June 29 at 2:55 p.m. Qualifications will be on Fri., June 30 at 1:35 p.m. with the race to be held on Sat., July 1 at 2:25 p.m. All times Eastern. The race will be televised on a tape-delayed basis by FOX Sports, and but will be streamed, live, on IMSA.com.