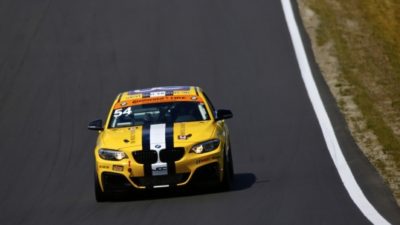 Johnson To Make First Start At Sebring In Sportscar Challenge

“I’m very excited to be racing at Sebring with JDC Miller-Motorsports this week,” said Johnson. “It has been three years since I’ve last run here in USF2000, so I’m ready to get be back out there! I feel all the things myself and the team learned at Daytona will help us a lot here. I have been training very hard this past month with my trainer Josh Gibbs making sure I’m physically and mentally ready to tackle this 2-hour race with Stephen Simpson. The race on Friday should be very exciting!”

When Johnson made the jump from open-wheel racing to sportscar for the start of the 2016 season, he didn’t make his first Continental Tire SportsCar Challenge start until May at Mazda Raceway Laguna Seca, after sitting out the first two races of that season. For 2017, they plan to compete in all the series race events.

The Continental Tire SportsCar Challenge opens for official practice at Sebring on Thurs., Mar. 16 at 9:50 a.m., which follows an open test which took place Wed. Two additional practice sessions will precede qualifications on Fri. morning at 8:30 a.m. The two-hour race will take place later that afternoon at 3:40 p.m. Johnson and Simpson are behind the wheel of the #54 BMW in the Street Turner (ST) class.

All of the 2017 CTSC races will be televised on a tape-delayed basis by FOX Sports. However, it will be streamed, live, on IMSA.com and on IMSA's mobile app.