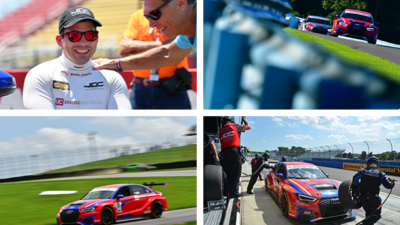 Two words that are inextricably-linked in the racing world. Words that every driver at every level aspires to use in describing a season.

They are also two words that epitomize the inaugural season for Michael Johnson and Stephen Simpson and the No. 54 JDC-Miller Motorsports team.

“2018 was a fantastic year,” said Johnson. “It started a bit rough breaking my leg in January, but the success I’ve had after the injury is everything I’ve been working for. JDC-Miller Motorsports is a championship caliber team and they’ve shown that this year as well as Stephen Simpson running this Audi RS3 LMS TCR car. 2019 should be another fantastic season.”

Undaunted by the injury suffered by Johnson in Daytona that forced the No. 54 car into the garage for the first two races of the season, the team provided a glimpse of things to come in its first race back on the track, the Mid-Ohio 120 in May. Johnson and Simpson led for laps early in the race but a delay, contact and a penalty during a pit hampered their efforts. Ultimately, the team finished a strong fourth.

That positive performance to open the competition for the season set the stage for a third-place finish at Watkins Glen and a second at Canadian Tire Motorsport Park.

But that was just the beginning for Johnson and Simpson.

Almost inevitably, the team broke through in its next outing, making history at Lime Rock Park in Lakeville, Conn in late July. Johnson, Simpson and the No. 54 JDC-Miller Motorsports team claimed victory, the first win for the group in the Continental Tire Challenge.

The win was memorable not just for its historical context but because it came in dramatic fashion with a last-lap pass and, ultimately, a photo finish.

Taking the top spot on the podium provided a bit of redemption for Johnson, a paraplegic since age 12.

I have been thinking about this win, coming in professional car racing since I broke my back.

This is all the hard work over the years coming together and everyone gets to see that. It makes me so proud that I can prove to everyone that I’m the same as everyone else and that I deserve to be here, and I love to be here.

With the team hitting its stride, the success didn’t end there. Two more podium finishes, at Road America in Wisconsin (3rd) and at Laguna Seca in California (2nd), and a fourth place at the Biscuitville Grand Prix in Virginia in the next three races kept the momentum rolling.

Johnson and Simpson ended the season on another high note, placing second at the Fox Factory 120 in Braselton, Ga. at Road Atlanta. The race was highlighted by the team’s best pit stop time of the season (1:30.212).

But they weren’t done quite yet for the year.

The Michelin Encore in Sebring, Fla. in early November afforded Johnson and Simpson one final opportunity to shine in 2018 and build towards 2019. The team came tantalizing close to a second victory but had to settle for another runner-up finish when their Audi RS3 LMS TCR came up short on fuel.

A review of the season’s accomplishments is nothing short of impressive – one title-win, four runners-up, two third-place finishes and two fourths. To say that the team Johnson and Simpson spent the predominance of the season at the front of the pack is no exaggeration.

Two words, that based on the outcome of the 2018 season, will aptly define the Simpson-Johnson-JDC-Miller Motorsports team for years to come.

The future is bright. Buckle up and enjoy the ride.