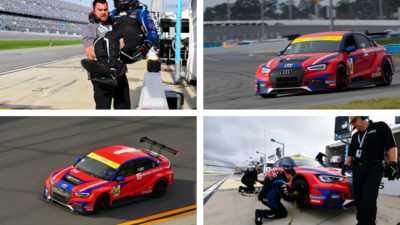 A highly-successful 2018 season laid a sturdy and strong winning foundation for drivers Michael Johnson and Stephen Simpson and the JDC-Miller Motorsports team.

The time has come to build on it.

Johnson and Simpson will get their first opportunity to do that in 2019 when the No. 54 Audi RS3 LMS TCR car races at the ROAR Before the Rolex 24 at legendary Daytona International Speedway in northeast Florida this weekend.

For the team, it will represent a shot at redemption of sorts.

A year ago, Johnson suffered a broken leg in a crash in this same event at Daytona and the team missed the subsequent two races while the Lansing, Mich. native healed.

“I envision this year’s race as redemption for sure,” said Johnson. “I never had a chance to show what we had last year, so I plan to show that this year.”

While the accident serves as motivation, it won’t serve as a distraction, Johnson asserts.

“The accident was last year so it doesn’t bother me. The first couple laps (today), I was a bit cautious where the incident happened but after that, it was business as usual.”

Adding to the special nature of the event is the venue itself. Few tracks carry the same weight with drivers and race fans alike as does Daytona International Speedway.

“Daytona is such a unique track that nothing compares to it,” said Johnson. “It can be a track where you have lots of luck and other times it will bite you. I really do enjoy driving here with the high speeds and technicality of it. I’m excited to get my first win here.”

In 2018, Johnson and Simpson made a bold statement to IMSA followers, claiming one title-win, four runners-up, two third-place finishes and two fourths. A positive showing at the ROAR Before the Rolex 24 would add to that impressive resume and jump start the team for the 2019 season.

“I hope we can get the results we all deserve,” Johnson said. “Everyone has worked so hard during the season and the off season to make this program the best it can be. I’m ready to win a championship with Stephen Simpson and enjoy every minute of it.”

The ROAR Before the 24 is the first race of the season for the IMSA Michelin Pilot Challenge (formerly the Continental Tire SportsCar Challenge).

“We have high expectations for 2019,” said Simpson. “Michael is driving very well and we are looking to carry our strong 2018 season into this year. Our goal is to challenge for the championship and it all starts this weekend.”