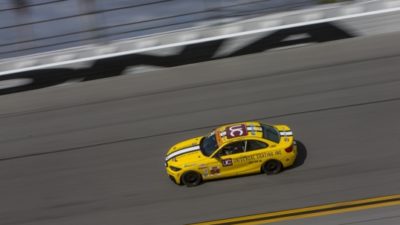 JDC-Miller Motorsports for 2017 season with BMW

Paralyzed driver signs on for another season with teammate Simpson

Daytona, FL (Jan. 4, 2017) – 24-year-old sportscar driver Michael Johnson announced today that he will join JDC-Miller Motorsports for another season in the Continental Tire SportsCar Challenge. The paralyzed former motorcycle racing champion was unable to complete the entire 2016 season, because his specially-designed car wasn’t race-ready in time for the first two competitions. However, Johnson will be testing this week in Daytona at “The ROAR Before the Rolex 24.” This will be the first time the BMW driver has raced the 3.56-mile track.

“I’m very excited to drive at Daytona International Speedway this week with JDC-Miller Motorsports in the BMW 228i M Sport,” Johnson said. “It’s one U.S. track I haven’t been to and I’ve been training very hard in the off-season with my trainer, Josh [Gibbs], to prepare. I can’t wait to get this season started!”

Johnson will be joined by teammate Stephen Simpson in kicking off the season in Daytona.

“Michael and I have been working together for the past five years,” Simpson said. “We really have a great opportunity, as a team, heading into the 2017 season. Michael is developing well as a driver and he is an inspiration to so many. Despite his challenges, he remains extremely competitive and, with JDC-Miller Motorsports behind us, we are ready to be up on the podium, winning.”

Team owner John Church is confident in his drivers, as well.

“We are really happy to have Michael and Stephen back for the 2017 season,” Church said. “These guys have been working tirelessly in the off-season and they are ready to race. We’re all looking forward to a great year.”

Johnson’s racecar will again be specialty-equipped with hand controls provided by GuidoSimplex. Due to Johnson being paralyzed from the waist down, his car has a complicated brake, gearshift, and throttle system, which are manipulated with his hands, instead of his feet.

The 2017 Continental Tire Challenge season opens at Daytona International Speedway on Jan. 26, with the ‘Rolex 24 at Daytona’ weekend, which includes the annual, three-day ‘ROAR Before the Rolex 24’ test session beginning this Fri., Jan. 6, in Daytona Beach, Florida. The season will conclude Oct. 4, 2017, at Road Atlanta in Braselton, Georgia, which will complete a 10-race schedule.