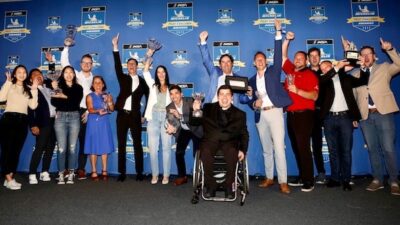 Hindered by a variety of small setbacks throughout much of this year’s series, each of which prevented the team from maximizing its opportunities, the team hung tough, stuck together and plowed forward undaunted. That approach produced positive results as the season wore on, culminating on Friday afternoon with an impressive second place finish in the Fox Factory 120 at Michelin Roadway Road Atlanta.

With that podium finish, Johnson, Simpson and the BHA team ended the season in third place in the final 2022 IMSA Pilot Challenge standings.

“This weekend at Michelin Raceway Road Atlanta was simply amazing,” said Johnson. “We all did such an amazing job with strategy and teamwork. Stephen drove a stellar stint and brought the car home in second place. With that finish, we ended up third in the championship. I can’t thank the entire Bryan Herta Autosport crew enough for their hard work and determination. This is the best season ending finish I have ever had racing on four wheels. So, needless to say, it’s absolutely amazing! I can’t wait to see what the future in my racing career holds!”

The second place showing at Road Atlanta earned Johnson and Simpson 320 points, giving them a total of 2650 for the season. They finished just 60 points out of second place.

“It was a great way to finish the season,” said Simpson. “I am really proud of Michael; I am really proud of the whole team. Finishing third in the championship , it was Michael’s best season he has ever had in car racing. I am just so happy for him.

“Our goal this weekend was to claim third in the championship and we knew it was going to be a tough task because of the competition, so to come away with that third place and a second place in the race, it feels great. We probably needed another lap or so and we would have had a real shot at that victory.

“What made this race more difficult, even though the car set up was great, was I didn’t feel we hit the sweet spot. We weren’t the fastest car out there but we were able to stay out of trouble and make good decisions in the pits. I drove as hard as I could and we got a great result. I am feeling really good.”