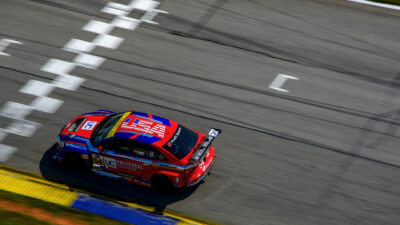 “The whole time at Road Atlanta was challenging right from the beginning,” said Johnson. “We were struggling for speed during practice but was confident we would find it in the race. I think we did so but, unfortunately, we had a fuel issue at the end of hour two. We were never able to rebound from that. It’s unfortunate, but we are looking forward to Mid-Ohio next weekend.”

“All in all, it was not the weekend we were hoping for,” said Simpson. “Michael did a great job in the first two stints when he was in the car. He did everything right. Practice was good. We were really set up for a good race. But, unfortunately, we had a couple of things happen in the race. We had a fuel issue among other things, which put us out of contention. We finished the race, ultimately, but not fighting for the win like we were hoping. Fortunately, we are back at Mid-Ohio in a couple of weeks and then back in Atlanta. We will keep our heads down, focus forward and look to get the results we want.”

The next installment of the 2020 IMSA Michelin Pilot Challenge, the sixth race overall, is scheduled for Sept. 25-27 in Lexington, Ohio. The two-hour Acura Sports Car Challenge at the 2.258-mile, 13-corner Mid-Ohio Sports Car Course is set to go green on Sunday, Sept. 27 at 2:10 p.m. ET.

Last season at Mid-Ohio, the Universal Coating No. 54 Audi RS3 LMS TCR car was running in fifth place when it was contacted from behind, forcing it off the track. The team ended the day in 10th place.