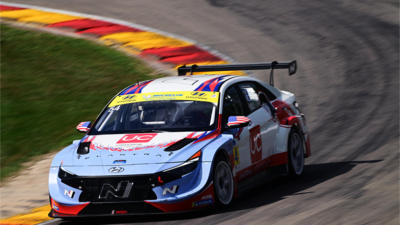 For the second consecutive race, the team recorded a second-place finish, this time at the Road America 240 in Elkhart Lake, Wis., the eighth leg of the 2022 IMSA Pilot Challenge.

In late July, Johnson and Simpson crossed the finish line third at the Lime Rock 120 in Connecticut but were elevated to second place following a disqualification.

“This past weekend at Road America for the four-hour race was very, very good,” said Johnson. “I feel like Bryan Herta Autosport did a fantastic job with strategy throughout the entire race. I feel like we had decent pace and the Hyundai Elantra N worked perfectly. Stephen did a phenomenal job bringing it home for a second-place finish! I can’t think the entire BHA team enough for all their hard work. Let’s keep this momentum going for the next race in Virginia!”

With 640 points claimed from the last two races, Johnson and Simpson reside in fifth place in the IMSA Pilot Challenge standings with 2070 total points. The team is just 30 points out of fourth place and 200 points off the pace of the standings leader.

“It was a great job by the whole BHA team,” said Simpson. “Our Hyundai Elantra N TCR car was really good in the race. We really wanted that win for Michael, for the team and for Hyundai. We really gave it our best shot. Two second place finishes in-a-row is really good going. We have a good group. The team did amazing job at pit stops. Our engineer, Chris, was fantastic. He gave us a really good car.

“It was a long, tough race. It was very, very hot. It was probably mid-90s and inside the car, it was toasty. The race had a bit of everything. We had to do a lot of fuel saving at times. There were a lot of caution periods with other incidents but we were able to stay clean. There was not a scratch on the car after the race. Again, I am proud of the guys and am proud of the way Michael is driving. We have good momentum going at the moment.”

Johnson, Simpson and the BHA team will bookend the month of August on the track, racing again on Saturday, August 27 in the Virginia Is For Racing Lovers Grand Prix at Virginia International Raceway in Alton, Va.

The two-hour race, the ninth and penultimate installment of the 2022 IMSA Pilot Challenge, on the 18-corner, 3.27-mile VIR course is scheduled to go green at 4:40 p.m. ET.