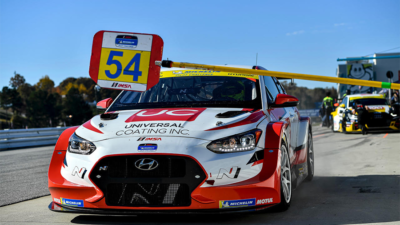 ATLANTA – It all comes down to this.

Drivers Michael Johnson and Stephen Simpson and the Bryan Herta Autosport (BHA) team will finish out the 2021 IMSA Michelin Pilot Challenge on Friday, Nov. 12 at the Fox Factory 120 at Michelin Raceway Road Atlanta in Braselton, Ga.

“I cannot overstate enough the importance of this weekend for Hyundai, BHA and our Universal Coating No. 54 program,” said Johnson. “Hyundai’s championship vision has brought us to a level that will include Michelin Pilot Challenge’s first female champion, Taylor Hagler,  our teammate once the race begins, and another drive to a manufacturer’s championship for the fourth consecutive year.

“The unwavering support from BHA has been the driving force behind what appears to be a huge finale for us and we are grateful to them. We have great expectations for this weekend!

For Johnson and Simpson, much is at stake in the season finale.

The team resides in fourth position in the IMSA Michelin Pilot Challenge standings, just 50 points out of third place and 80 from second place. A win or a podium finish could vault Johnson and Simpson up the standings.

When last on the track, Johnson and Simpson earned the co-drivers’ first podium finish of the 2021 IMSA Michelin Pilot Challenge season, placing second at the Virginia Is For Racing Lovers Grand Prix at VIRginia International Raceway in Alton, Va.

The top three showing by Johnson and Simpson was also their first since joining the Bryan Herta Autosport (BHA) team.

In 2020, at Michelin Raceway Road Atlanta, Johnson and Simpson recorded an eighth-place finish at the VP Racing Stay Frosty 240. A fuel issue at the end of the second hour of the four-hour race proved to be a setback too large to overcome.

“I am very excited to get on the track,” said Simpson. “It’s going to be an exciting weekend with the potential for us to finish as high as second in the championship. Third place is also a possibility. So, lots to race for. At the same time, if it doesn’t go so well we could fall back to sixth or seventh. There is a lot on the line. There are the most cars of the season entered in the TCR class in this race, so it’s going to make Friday interesting and action packed. I am expecting yellow flag caution periods. The last race of the year always seems to be a crazy one with lots of aggressive driving.