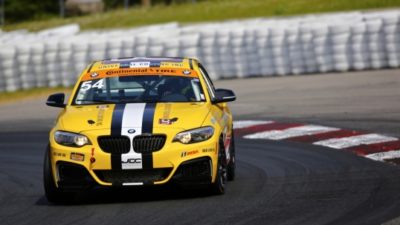 JOHNSON AIMING TO BUILD ON MOMENTUM HEADING INTO CANADA

“I’m very excited to get back running in Canada this weekend,” said Johnson. “We had a decent result last weekend at Watkins Glen and I’m ready to do even better and build on our momentum.”

The JDC-Miller Motorsports pilot will tackle Canada’s first purpose-built road course previously known as MoSport International Raceway. Official practice begins Fri., July 7 at 10:00 a.m., with qualifying at 8:30 a.m. on Sat., July 8. The race will be held on Sat. afternoon beginning at 2:50 p.m. for the Canadian Tire Motorsports Park 120. The race is timed with a two-hour window. All times Eastern. The race will be televised on a tape-delayed basis by FOX Sports, and but will be streamed, live, on IMSA.com.

Johnson is of course paired with teammate Stephen Simpson, from Cape Town, South Africa, in the Street Tuner (ST) class. Johnson’s car is specially equipped with hand controls, provided by GuidoSimplex, due to his paralysis. Johnson’s car features a complicated brake, gearshift and throttle system, with which Johnson uses his hands to control systems other drivers manipulate with their feet.