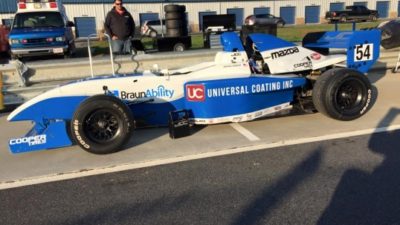 LEXINGTON, OH. (July 2, 2015) – American paralyzed racer Michael Johnson officially wrapped up a three-month rehabilitation from injuries sustained from a practice incident in March, to resurface for a Pro Mazda Championship Presented by Cooper Tires test at Mid-Ohio Sports Car Course earlier this week. Johnson’s return marked a long journey after sustaining fractures to his hip and pelvis on the Streets of St. Petersburg, Fla., which included a nearly three-week stay at a Florida hospital that involved surgery and a lengthy road back to the racetrack.

“Mid-Ohio was actually my second time back in the racecar, but I still felt somewhat green to it,” said Johnson. “This two-day Mid-Ohio test was much different than a few weeks ago when I ran because the nerves of getting back in the car after being out for so long had somewhat worn off. Also, being back out there running with competitors is really what I need and this test did just that. Being able to be on track with traffic gave me that urge to push every lap. I obviously have a lot to still pick-up on and since all my competitors have been racing all-season long, I have to play a bit of catch-up here before the end of July. My old driving style is coming back and by the end of the second day of testing, I was pushing it harder and harder going through the corners and being more and more aggressive. Momentum through the corners is so important and just finding that confidence in the car was a big win for me at the team. Hopefully we’ll have decent weather when we come back to Mid-Ohio at the end of the month for the race weekend. I’ll be continuing my aggressive training program and hope to get another test in, too. I have to be sure I’m 100 percent ready to race, to be competitive and that my mind is straight. The last session of the test showed that I was competitive, that I’m in the ballpark, and that I’m officially back.”

On March 27, Johnson’s car made heavy contact with a Turn 3 barrier on the 1.8-mile, 11-turn St. Petersburg street circuit. He was admitted to Bayfront Medical Center and discharged on April 15.

During the two-day test on June 30 and July 1 at Mid-Ohio SportsCar Course, Johnson turned a total of 88 laps over six sessions on the 2.258-mile, 13-turn road course that will host Pro Mazda, Indy Lights Presented by Cooper Tires and the USF2000 Championship Powered by Mazda races on July 31-Aug. 2 as support races for the VERIZON IndyCar Series double-header weekend. The Mid-Ohio race weekend is slated as Johnson’s first race back following his lengthy recovery. He will also compete in the season-finale weekend at Mazda Raceway Laguna Seca in September.

Johnson, of Flint, Michigan and driving for JDC Motorsports in the No. 54 entry, is the first and only paralyzed driver licensed by INDYCAR to compete in the series’ developmental ladder program, Mazda Road to Indy, which prepares drivers for the VERIZON IndyCar Series and Indianapolis 500. The 22-year-old drives a specialty-equipped racecar with hand controls.

He completed his rookie season in Pro Mazda in 2014, where he finished 13th of 32 entries as part of his move up to the second step on the Mazda Road to Indy ladder. His best finish last season was 10th on the Streets of St. Petersburg.