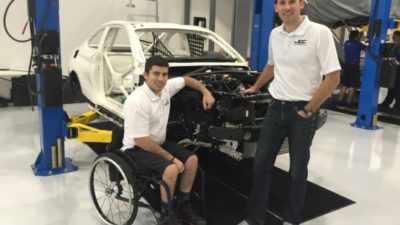 MINNEAPOLIS, MN  (Nov. 16, 2015) – Former motorcycle racing champion and the first and only paralyzed driver to be licensed by INDYCAR® announced today he will drive a BMW 228 M Sport Coupe during the International Motor Sports Association’s (IMSA) “Continental Sports Car Challenge” (CTSC) in the upcoming season.

“With JDC Miller Motorsport still behind me, I’m looking forward to a smooth transition and a great season in 2016,” said Johnson. “To also have a BMW under me and Stephen Simpson as a teammate, I’m thrilled at what is ahead. To be starting a relationship with a manufacture as prestigious as BMW is a real honor for me. This is obviously a new endeavor for me; I’ve never drove this style of car before but I’m so excited to be involved in IMSA’s Continental Tire SportsCar Challenge.”

Team owner, John Church, is just as confident in his driver.

“Johnson has the fire in his belly that you look for in a driver,” said Church. “He has relentless motivation and a ‘no-quit’ attitude that makes him not only an intimidating competitor, but also an asset to the sport. He raises the bar for paralyzed and able-bodied athletes, alike and I think the BMW 228 M is the perfect car to get him to the finish line.”

Johnson’s racecar will be specialty-equipped with hand controls provided by GuidoSimplex. Due to Johnson being paralyzed from the waist down, his car has a complicated brake, gearshift, and throttle system—he presses a ring on the steering wheel forward to accelerate, then pulls another ring toward him to brake.

“Michael [Johnson] pushes the limits of what some would think impossible,” said teammate Simpson. “He works harder than any athlete I know and he won’t stop until he accomplishes his goal. Working with him only fuels my own fire, even more. The 2016 season will be a great benchmark for us in Continental Tire and doing that in a BMW in the ST class will be great.”

The 2016 Continental Tire Challenge season opens at Daytona International Speedway on Fri., Jan. 29, 2016, as part of the ‘Rolex 24 at Daytona’ weekend. Participation also includes the annual three-day ‘Roar Before the Rolex 24’ test session, scheduled for Jan. 8-10, in Daytona Beach, Florida. The season will conclude Oct. 1, 2016, at Road Atlanta, which will complete a 10-race schedule.

All of the 2016 CTSC races will be televised on a tape-delayed basis by FOX Sports, as well as streamed, live, on IMSA.com.

In addition to primary backing from Universal Coating, Johnson’s racing efforts are also supported by: BraunAbility, and Arai Helmets.