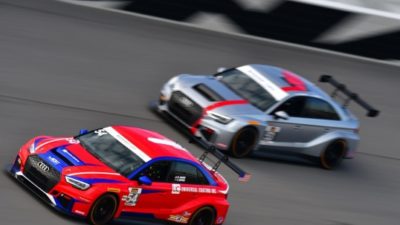 Michael Johnson set to compete in 2018

Daytona, FL (Jan. 6, 2018) – 25-year-old sportscar driver Michael Johnson will join JDC-Miller Motorsports for another season in the Continental Tire Sports Car Challenge. The former motorcycle racing champion who was paralyzed at age 12 during race action and head of Michael Johnson Racing ran car test this weekend in Daytona at ‘The ROAR Before the Rolex 24.’

“Daytona is a legendary track, so there’s no better place to start the season,” said Johnson, “We’ve worked hard since our first full season last year, and I can’t wait to show the world how much we’ve improved.”

Johnson will for another season be joined by teammate and driving coach Stephen Simpson.

Said Simpson, “I am excited to be continuing my strong relationship with Michael and helping him achieve his motor racing goals. Michael has continued to make good progress and I am confident 2018 is the year everyone gets to see the progress I know he has made.”

Johnson will return to the track in a new Audi RS 3 LMS TCR. Due to Johnson being paralyzed from the waist down, his car has a complicated brake, gearshift, and throttle system, which are manipulated with his hands instead of his feet. Johnson’s racecar is equipped with customized hand controls provided by Guido Simplex.

“This Audi car is amazing. The technology and performance are just stunning compared to the vehicles I’ve driven in the past. I’m excited to keep learning and earn the results we’ve worked toward.”

“Michael has continued his improvements this off-season from where we left off." Gibbs stated. "We have increased our already intense program to achieve our 2018 goals. Michael’s physical and mental preparation has reached a new level of competition and dedication in training,” said Gibbs.

Added Gibbs, “I am truly excited to see him in action.”

The 2018 Continental Tire Challenge season opens at Daytona International Speedway on Jan. 27, with the ‘Rolex 24 at Daytona’ weekend, which includes the annual, three-day ‘ROAR Before the Rolex 24’ test session, which began on Fri., Jan. 5, in Daytona Beach, Florida. The season will conclude Oct. 13, 2018, at Road Atlanta in Braselton, Georgia, which will complete a 10-race schedule.

All of the 2018 CTSC races will be televised on a tape-delayed basis by FOX Sports, as well as streamed, live, on IMSA.com. Michael Johnson Racing has also recently enlisted Elevate Sports Consulting LLC. As it’s Official Marketing & Engagement partner, Operated by Josh Reasoner and associates.

Said Reasoner, “Michael Johnson is the best example of a true champion. His commitment to his family, education, profession and outreach is unmatched. We are very excited to show current partners, future partners and supporters just how much Michael does to excel, not only in the car, but life as well!”