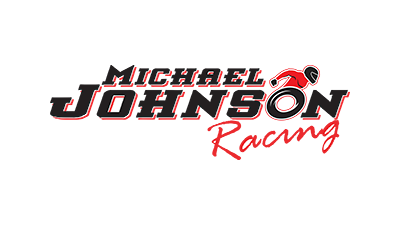 INDIANAPOLIS, IN (December 15, 2021) – Drivers Michael Johnson and Stephen Simpson are poised to take the TCR class of the IMSA Michelin Pilot Challenge (IMPC) by storm in 2021, as Michael Johnson Racing (MJR) announced on Tuesday their partnership with Bryan Herta Autosport (BHA), a premier championship-winning franchise in auto racing.

The duo of Johnson and Simpson will share the driver’s seat of the #54 Hyundai Veloster N TCR race car.  “I’m very excited to be partnering with Bryan Herta Autosport for the 2021 season,” said Johnson. “Aligning our teams is the next step in my career and I couldn’t be more thrilled to work with everyone and go for a championship.”  Universal Coating, an industry leader in specialty and high-tech coating services, will remain as the primary sponsor of the red-and-white decked No. 54 Veloster.

“We are excited to be working closely with MJR this season and Michael Johnson and Stephen Simpson,” said Bryan Herta. “We’ve known Michael and Stephen as formidable competitors in the past, and I am excited to see what they do in the Veloster. The #54 Veloster will run under our tent, right alongside our three BHA entries.  Together, we’ll work towards our common goal of defending Hyundai’s Manufacturers Championship.  They will undoubtedly strengthen Hyundai’s presence in IMSA competition as I expect to see them run up front all season long.”

Michael Johnson possesses one of the most inspirational and remarkable stories in all of professional sports. Paralyzed from the chest down at the age of 12 while racing motorcycles, Johnson has overcome all obstacles to make a name for himself in the sport car racing world. He will pilot his Hyundai Veloster N TCR using a set of complex and state-of-the-art hand controls.

Johnson and Simpson are no strangers to success on the IMPC circuit. In 2018, Johnson provided one of the most memorable and emotional moments in challenge history at Lime Rock Park, when he captured the racing world spotlight by winning his first professional race. That same year, the team also posted four runner-up finishes, two third-place showings and two fourths. In 2019, in qualifying for the BMW Endurance Challenge at famed Daytona International Speedway, Johnson made history once again, breaking the TCR course record and securing the pole position. Last season, they recorded another podium finish on the hallowed asphalt of Daytona.

“Today marks another milestone for Michael and his MJR program with this announcement,” said Josh Reasoner, Director of Michael Johnson Racing. “Past achievements on the track have paved the way for this partnership and for future success. In 2021, we believe Michael will continue to shatter the norms by showing that his injury cannot hold him back. We are grateful and looking forward to having a close working relationship with BHA.  Hyundai’s success in IMSA has been unmatched. The track support that BHA will provide for our Universal Coating No. 54 car will undoubtedly be the same.”

Sports Car standout Stephen Simpson enters his sixth season co-driving with Michael Johnson in 2021, “I am excited to continue co-driving with Michael Johnson, especially with our new partnership with BHA and the ultra-competitive Veloster N TCR.”  Together, Simpson and Johnson have finished on the podium at each of the events on the IMSA Michelin Pilot Challenge schedule. “It’s going to be a new challenge for Michael and me but one that are we very ready for and very much looking forward to. The BHA team and Hyundai have had a great deal of success over the past few years and we look to add to their win record. That is our goal for next year. There is going to be a lot of tough competition in the TCR class, as always, so nothing will come easy. It will require a lot of hard work, but we are up to the challenge and excited about this new chapter. I can’t wait to get started” said Simpson.

Johnson and Simpson will get behind the wheel for the first time in the #54 Hyundai Veloster N TCR as part of the Bryan Herta Autosport in January 2021 at the ROAR Before the Rolex 24 at Daytona International Speedway. Follow us at MichaelJohnsonRacing.com and BryanHertaAutosport.com.