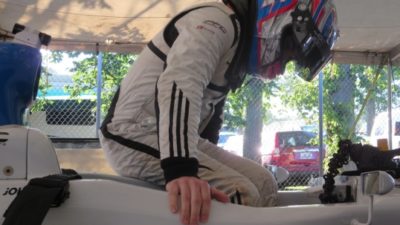 Looking for Confidence After Pro-Mazda Return

Editors note: Pro Mazda Championship Presented by Cooper Tires driver, Michael Johnson, of JDC Motorsports, sat idle for nearly four months recovering from a crash during the opening practice session of the Allied Building Products Grand Prix of St. Petersburg on Fri., Mar. 27, 2015. He sustained fractures to the hip and pelvis. He was held at Bayford Medical Center for nearly three weeks before being discharged on April 15. He returned this weekend at Mid-Ohio Sports Car Course.

When I sat down to start writing about how this weekend went at Mid-Ohio Sports Car Course, I found myself starring at the screen wondering how did it actually go.

My goal going into the weekend was a top-10 result. While it may have been a lofty goal, I don’t consider myself naïve to how deep the Pro Mazda field is. I’m also not stupid in being aggressive with where I want to be and quite frankly need to be.

My best advice is, it’s not over when you are loosing terribly, it’s over when you quit. I try and keep this in mind whenever I’m struggling to get by. If I didn’t say the last four months were a struggle, I’d being lying.

I was in a Florida hospital for nearly three weeks. After my surgery, and with fractures to my hip and pelvis, I slipped into a semi-coma for nearly two weeks—my lungs shutting down from inflammation and from struggling with my breathing.

After being released from the hospital, one of the first tweets I saw was from VERIZON IndyCar driver James Hinchcliffe, wishing me well. Ironically, just two months later he’d be fighting for his life, too, after suffering a fractured pelvis as well, just like I had. Part of his car suspension had pierced his upper left thigh, causing significant blood loss and requiring surgery, quite comparable to my accident. The similarities are intriguing.

I considered my recovery complete when I strapped in for the first practice session this past weekend at Mid-Ohio. I had a flutter of memories from St. Pete and how that weekend went. I said I little prayer that this one would be different.

I was driving a new car at Mid-Ohio as my car from St. Pete was destroyed in the crash. This is significant for many reasons, most pointedly because of the inner workings of my racecar that are different than my fellow competitors. I drive a specially equipped car that includes a complex brake and throttle system all developed through my steering wheel. To apply the brakes, I press the steering column forward and use a lever on the steering wheel to control the throttle—all of this in addition to steering, of course.

This creates many multifaceted issues that could go wrong in addition to setting up a car and dealing with push. Not to mention, the car potentially being too loose and all of that.

Honestly, his weekend was frustrating. My return wasn’t to just get back out there; I’m here to win. And I MUST get my car set-up to enable me to run up front and be competitive, in addition to getting my confidence back. I was dealing with a clutch issue that hampered what I could do on track this weekend.

I’m still struggling getting my confidence back to charge, like I need to be doing in the faster corners and to be aggressive. I know that will come with time. To get my mind straight I think I just need more seat time. As the weekend progressed, my times improved and I recorded my fastest lap of the weekend during qualifications.

I’m working to get more comfortable so I’ll be ready to go for next year. For now my focus turns to Mazda Raceway Laguna Seca, which is the second week in September and the last races of the 2015 season.

I must give a profound shout out to all the guys on my team who helped me get back out there. From my mechanic Scott, to Team Owner John Church, to my Manager Klint, my Trainer Josh, to my dad—it has taken a village to get me back here. To my sponsors—BraunAbility, Universal Coating, Arai Helmets, and Adidas Motorsport—thank you for sticking by my side.

It has taken a lot of hard work to get to where I was at before the crash. But I’m very excited to see what I can do at Laguna Seca in about a month.

Thank you for joining me on this ride.