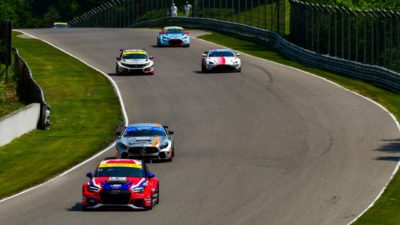 LAKEVILLE, Conn. – Co-drivers Michael Johnson and Stephen Simpson and the JDC-Miller Motorsports team will return to the scene of its first-ever win on Saturday, July 20 when it races in the Lime Rock Park 120 at historic Lime Rock Park in Lakeville, Conn.

The Lime Rock Park 120 officially marks the midway point of the 2019 campaign of the IMSA Michelin Pilot Challenge.

“Lime Rock should be an exciting race,” said Johnson. “We won here last year, so I’m expecting big things. I have always had good success there and I think it’s a very fun track. It’ll be a battle with how small the track is, all the traffic and the heat, but I’m ready.”

Last season, history was made at Lime Rock Park. Johnson, Simpson and the No. 54 JDC-Miller Motorsports team claimed victory, the first win for the group in what-was-then the Continental Tire Challenge.

“I am definitely looking forward to getting back to Lime Rock Park,” said Simpson. “Last year, it was one of the highlights for Michael and me. It has been a bit of a challenging year so far for us, but Michael has been driving very well and the JDC-Miller Motorsports team has been doing a great job. We just need a little luck on our side. I have no doubt we are going into this weekend fully capable of repeating the result from last year and that’s our goal.”

Built in 1956, Lime Rock Park, which features a circuit length of 1.50 miles, is the nation’s oldest continuously operating road racing venue. It was listed on the National Register of Historic Places in 2009.

The weather forecast on race day in Lime Rock, which is located in the northwestern corner of Nutmeg State, is calling for partly cloudy skies with scorching temperatures in the mid 90s. Winds will be from the west at 5 to 10 mph.

The two-hour Lime Rock Park 120 is scheduled to go green at 11:10 a.m. ET and can be streamed live on IMSA.tv with IMSA Radio commentary. The NBCSN broadcast will air on Friday, July 26 at 6 p.m.

The next IMSA MICHELIN Pilot Challenge race will take place on Sunday, August 4 in Elkhart Lake, Wis. at 4.0-mile Road America. The Road America 120 is two hours in length. In 2018, the team followed up its win at Lime Rock with a third-place finish at Road America.