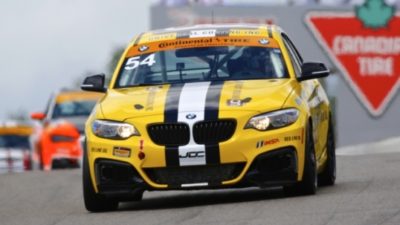 “I'm really excited to get back racing at Lime Rock Park,” said Johnson. “I've had some good success there in the past so hopefully we can have a great race. Everyone from JDC Miller-Motorsports has been working very hard on this BMW 228i M Sport and I'm ready to improve even more!”

Lime Rock Park, a hamlet in the town of Salisbury, opens for practice on Fri., July 22 at 10:05 a.m., followed by an early afternoon practice and qualifications at 3:25 p.m. The Continental Tire Road Race Showcase will be contested on Sat., July 23 at 10:00 a.m. (all times Eastern). The race will be televised on a tape-delayed basis by FOX Sports, and but will be streamed, live, on IMSA.com.

Johnson and his Street Turner (ST) class co-driver, Cape Town South Africa’s Stephen Simpson, will be touring the 1.5-mile natural-terrain 7-turn road-racing venue through a mix of uphill and downhill twists and turns. Their BMW is a specially equipped with hand controls, provided by GuidoSimplex, due to Johnson’s paralysis. The car features a complicated brake, gearshift and throttle system, with which Johnson uses his hands to control systems other drivers manipulate with their feet.