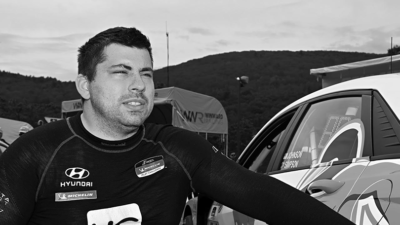 The duo and the Bryan Herta Autosport (BHA) Team captured a podium finish on Saturday, placing third in the Lime Rock Park 120 at the 1.5-mile, seven-corner track in Lakeville, Conn.

In 2018, Johnson and Simpson took the checkered flag at Lime Rock, winning their first their race as a driver team. In 2019, they overcame sweltering temperatures to race to a second-place finish.

The positive mojo started early for the team, as Johnson qualified in the third position in the No. 54 Universal Coating Hyundai Elantra N TCR car for the two-hour race.

“I thought this weekend at Lime Rock, was really, really good,” said Johnson. “My qualifying was excellent. It’s the first time I qualified as high as I did this year. Normally, when we come to Lime Rock, it’s always been a good track, especially with our win in 2018.

“This weekend was excellent, especially with us getting on the podium. I thought my driving was good. I thought Stephen’s driving was really, really good. We had a shot for the win but the cautions didn’t work in our favor. The guys set the car really well. I can’t thank the whole BHA team enough and everyone with MJR to get this together. We finally got a really good result; something we should have had every race this season. We have been working towards this every race to get a little bit better and we are super close. This feels like a win to us and hopefully we can use this momentum toward Road America in a couple of weeks and try to get another podium and go for the win there.”

The third-place finish will bank 300 key points for Johnson and Simpson in the IMSA Pilot Challenge standings.

“It was a very solid weekend for us at Lime Rock Park,” said Simpson. “It was great to have a really good weekend and that translated into a solid result and a return to the podium for Michael and me. We felt really good all weekend. Michael did an amazing job in qualifying, finishing so close to the pole position. I am very proud of him and how he has been driving so well and improving. And that really set us up for a strong race.

“The team did a great job. Our pit stops and tire changes were good and really quick. Our engineer, Chris, was really on it and made some great decisions. And I think we had a strong car during the race. I gave it a really good go. But it didn’t quite work out with how some of the yellow flags worked after leading for a lot of the race. But, all in all, I am really happy we got back on the podium. I feel like the team has been getting better and better on our No. 54 car and am really excited and have high hopes for the remainder of the season.”

After a few weeks off from competition, Johnson, Simpson and the BHA team will open the month of August by competing in the eighth leg of the 2022 IMSA Pilot Challenge, the Road America 240, as part of the IMSA Fastlane Sportscar Weekend.