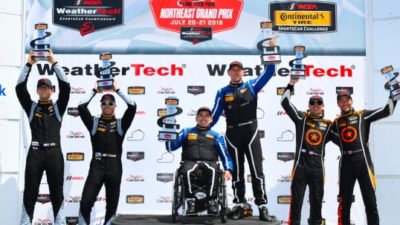 The No. 99 R Lime Rock Park, while famously known by drivers for its difficulty to pass, provided one of the most memorable moves and emotional victories in IMSA Continental Tire SportsCar Challenge history Saturday.

The TCR class victory went to the No. 54 JDC-Miller Motorsports team with drivers Stephen Simpson and Michael Johnson, making it the first win for the group in the Continental Tire Challenge.

It was also the first professional race victory for 25-year-old Johnson, who at the age of 12 was paralyzed from the waist down in a motorcycle incident.

“I have been thinking about this win, coming in professional car racing since I broke my back,” said Johnson, a Lansing, Michigan resident. “This is all the hard work over the years coming together and everyone gets to see that. It makes me so proud that I can prove to everyone that I’m the same as everyone else and that I deserve to be here, and I love to be here.

“I’m so proud, all the talking and now showing people that I can finally get them real results. It clearly shows that it can be done and I am so proud that I can show other people, and talk to them, that dreams can come true with lots of hard work.”

The win came in dramatic fashion with a last-lap pass and, ultimately, a photo finish.

In the closing minutes of the two-hour race, leader Kenton Koch defended his No. 12 eEuroparts.com Racing Audi RS3 LMS against an eager Simpson in the No. 54 Audi. Simpson loomed large in Koch’s mirror until the final two laps, when he brought his Audi door-to-door with Koch’s and even briefly getting ahead momentarily before Koch slid back around into the lead.

Yet Simpson’s momentum coming off the final corner and onto the straightaway heading to the checkered flag couldn’t be stopped. He ducked inside of Koch and won the drag race, ultimately beating him to the stripe by 0.066 seconds for the third closest finish in Continental Tire Challenge history.

“We were both sliding around a lot and Lime Rock Park is a fantastic racetrack,” said Simpson. “I loved racing around here and I always do but there’s also not too many overtaking places apart from Turn 1, so I knew I had to try something a little bit different… I did back off the last couple corners to make sure I got a good run coming down the hill and out of the final turn. It just feels good when a plan comes together.”

Simpson, though, credits his teammate of three years and the JDC-Miller crew.

“Michael did a fantastic job today, but not just today, the last couple of months,” said Simpson. “He really kicked things off and got us in a good position at the start and then the JDC-Miller Motorsports guys gave us a great car. It really was a team effort and I’m pleased to get the team and Michael’s first win in the IMSA Continental Tire Motorsports Challenge. It was an exciting end there and it was another good finish.”

Simpson and Johnson have undergone several ups-and-downs together in 2018. The duo missed the first two races of the 10-round season after an incident at the Roar Before the Rolex 24 at Daytona International Speedway in January broke Johnson’s leg and resulted in significant damage to the car.

Yet the team returned to the Continental Tire Challenge stronger than ever, as Saturday’s victory for the No. 54 comes on the heels of back-to-back podium finishes at Watkins Glen International and Canadian Tire Motorsport Park earlier this month.

“It’s pretty crazy how it all worked out,” said Johnson. “It’s all the hard work we have been putting in this program is finally paying off and it just shows with the numbers and the results we have been getting. Hopefully we can keep the results coming with getting that win every time.”

Koch and his co-driver Tom O’Gorman finished second, while Kuno Wittmer and Rodrigo Sales in the No. 74 Compass Racing Audi took third.

The next round for the IMSA Continental Tire SportsCar Challenge will take place at Road America in Elkhart Lake, Wisconsin on August 3 – 5. The two-hour race will be streamed live on IMSA.tv and can be heard on IMSA Radio on IMSA.com and RadioLeMans. Tickets are available at www.roadamerica.com.