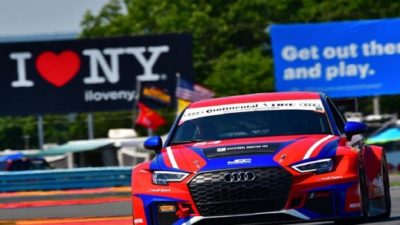 WATKINS GLEN, N.Y. – We love New York! The race team of Michael Johnson and Stephen Simpson had a strong showing this weekend as they finished in third place Saturday to earn a spot on the podium in the TCR IMSA series hosted by Watkins Glen International Speedway in Watkins Glen, N.Y.

It was the second race of the season for Johnson and Simpson in the No. 54 JDC-Miller Motorsports Audi RS3 LMS. It was an improved result after finishing fourth in the Mid-Ohio 120 back on May 5th and a positive continuation of the expected comeback.

“It was a good day and a solid result,” Simpson said. “I am very proud of Michael and the job he did behind the wheel. He was consistent and set some fast lap times during his stints. The JDC Miller Motorsports Team did a fantastic job and today’s result is the culmination of a lot of hard work from the guys. I’m looking forward to getting back in the car next week for our race at Canadian Tire Motorsports Park.” Simpson, Michaels Codriver
and driving coach stated.

IMSA series has been using the course at Watkins Glen for its weekend there every year. NASCAR also uses this course since returning there annually beginning in 1986.

The race took place in 90-degree heat, which was an added burden for the drivers in the event but still welcomed by Johnson.

Securing a third-place finish was encouraging for Johnson and the entire JDC-Miller Motorsports team. This is the first podium for Johnson at Watkins Glen and in the IMSA series.

“It feels amazing to be back up on the podium,” Johnson remarked. “We’ve been working so hard to make this happen. After my leg injury earlier this year, it’s incredible to get on the box in my second race back healthy. The car was handling great in the heat. We made some changes after qualifying and they were the right changes to make. During the race we adjusted the tire pressures to help with the heat. The next race for MJR is Canadian Tire Motorsports Park in Canada this weekend. With back-to-back races, we should all stay sharp so it will be an exciting race on Saturday!”

Johnson and Simpson will be back in action from July 6-8 at Canadian Tire Motorsports Park.