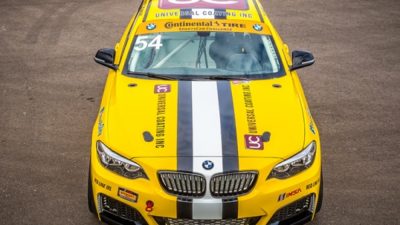 Johnson Gets Behind the Wheel at Laguna Seca

Monterey, Calif. (Apr. 25, 2016) – American paralyzed BMW driver Michael Johnson will kick off his sportscar career and the 2016 racing season at the Continental Monterey Grand Prix powered by Mazda on April 28.

The 23-year-old driver ended his open-wheel career on the same pavement where he will begin his sportscar journey. Johnson was out most of the 2015 season, recovering from a practice accident that kept him off the track for four months.

“I’m ready to take on Laguna,” said the first and only paralyzed driver to be licensed by INDYCAR. “After being sidelined most of last season, I’ve come back stronger and hungrier. I can’t wait to get behind the wheel.”

Johnson didn’t race in the first two competitions of the season, due to his modified car not being completed in time. His race car is specially equipped with hand controls, provided by GuidoSimplex. Because Johnson is paralyzed from the waist down, his car has a complicated brake, gearshift and throttle system. The special hand-controls on the former motorcycle racing champion’s car had to be perfected and he had to travel to Spain to test them.

“Johnson’s more than ready,” said team owner John Church. “He is a relentless competitor and he ups everyone’s game, when he’s competing. He’s an important part of this team and we can’t wait to get him on the track at Laguna.”

Sportscar racing has the highest automotive brand participation and promotion of any racing platform in the world, and the Continental Tire Challenge attracts a highly-desirable, affluent and educated fan-base. With an annual cumulative television audience of 10 million, Johnson’s camp is hoping to attract more corporate sponsors to support his program and his commitment to defying the odds, while overcoming challenges.

All of the 2016 Continental Tire SportsCar Challenge (CTSC) races will be televised on a tape-delayed basis by FOX Sports, and will be streamed, live, on IMSA.com.

In addition to primary backing from Universal Coating, Johnson’s racing efforts are also supported by: BraunAbility, OMP, and Arai Helmets.