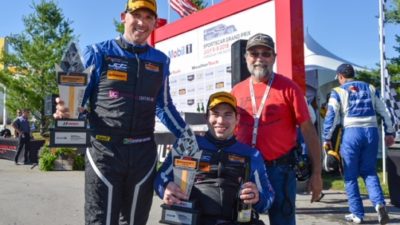 Canadian Tire Motorsports Park – JDC Miller Motorsports divers Michael Johnson and Stephen Simpson turned in another strong performance this weekend as they finished in the second spot Saturday to earn a podium landing and champagne shower in the Continental Sports car / IMSA series.

This is now the third race of the season for Johnson and Simpson in the No. 54 JDC-Miller Motorsports, Universal Coating, Audi RS3 LMS. Finishing fourth in the Mid-Ohio 120 on May 5th and a solid third place output at Watkins Glen last week, it was only natural for this team to continue to improve at this fast, winding track. Johnson came out of the gate delivering a P2 qualifying spot which put the team in a great position for a chance at victory.

Stephens says “It was another strong performance by the JDC Miller Motorsports team, we unloaded with a good car on Thursday, and fine turned it throughout the weekend. Michael did an outstanding job all weekend, he made good improvements and drove very well. Michaels front row starting position set the tone for the race and I’m pleased we came away with another podium finish.”

With a tough course and fierce traffic, Johnson and Simpson kept near record pace and consistent lap times to help with their near victory. The weather was at a steady 88 degrees and the Universal Coating Audi held together well in the stretch. Much improved pit stops and conservative fuel usage were also to be hailed.

Johnson says “This whole race went amazing for the JDC Miller Motorsports Team. We had good momentum coming from our first third place finish at Watkins Glen International. This race was a tough race with all of the traffic, but we managed and fought through it. This P2 finish is the best of my IMSA, TCR, Continental Tire Challenge career and I cannot thank everyone involved during this time enough for their dedication and hard work. JDC Miller Motorsports is one of the top teams in this series and I’m excited and humbled for the next opportunity to be on track.”

Michael, Stephen and the entire JDC Miller Team will be back in action July 20th and 21st at the famed Lime Rock park 120 in Lakeville, CT. The 2 Hour Northeast Grand Prix will be another attempt to reach for victory Lane in the #54 Audi.