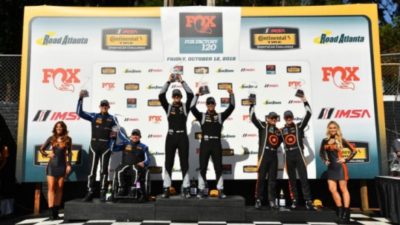 BRASELTON, Ga.  – Michael Johnson and Stephen Simpson, racing in the No. 54 JDC-Miller Motorsports Audi RS3 LMS, finished the 10th and final round of the ST class in the IMSA Continental Tire SportsCar Challenge strong, placing second at the Fox Factory 120 on Friday, Oct. 12 at Road Atlanta in Braselton, Ga.

The two-hour race, which was part of 21st Annual Motul Petit Le Mans event hosted by Road Atlanta, was completed under clear and sunny North Georgia skies, allowing for a fast track for the JDC-Miller Motorsports Universal Coating Audi and the rest of the field.

“This weekend at Road Atlanta went very well with JDC-Miller Motorsports,” said Johnson. “My stint went very well, bringing it in third at the pit stop. Stephen Simpson did an amazing job as well bringing it into second at the end of the race. Overall, six podiums in eight races is a huge accomplishment, and the best in my racing career. I’m very excited for the 2019 season and I’m hoping to win the championship with Stephen Simpson by my side!”

Johnson, who was paralyzed in a motorcycle crash at the age of 12, has raced in the open-wheel ranks and Continental Tire SportsCar Challenge in specially equipped race cars with hand controls. He bounced back to have a strong season after suffering a broken leg during an incident at the Roar Before the Rolex 24 in early January.

“It was a solid end to our season,” said Simpson. “Road Atlanta is a tough, but great race track. The JDC-Miller Motorsports team did a great job all weekend and we had our best and fastest pit stop during this race …. I’m excited to build on this season and go into the 2019 season with one goal — to win the championship.”

The race was also the final event under the Continental Tire sponsorship name. Michelin will become the official tire of IMSA in its premier series — the IMSA WeatherTech SportsCar Championship and its two major Challenge series — beginning in 2019.