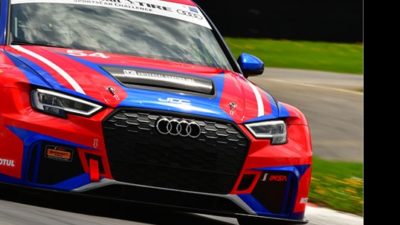 LEXINGTON, Ohio – Michael Johnson and Stephen Simpson, racing in the No. 54 JDC-Miller Motorsports Audi RS3 LMS, finished fourth after leading laps early in the race on Saturday, May 5 in the Mid-Ohio 120 at the Mid-Ohio Sports Car Course.

It was Johnson and Simpson’s first race of the season as part of the IMSA Continental Tire SportsCar Challenge after Johnson suffered a broken leg during an incident at the Roar Before the Rolex 24 in early January.

Johnson pitted from lead, but difficulties changing a tire delayed the stop, and contact as Stephen Simpson left the pit box led to an additional loss of time and a drive-through penalty.

“Our JDC-Miller Motorsports/Universal Coating No. 54 Audi RS3 LMS TCR car ran excellent today and the entire weekend,” said Johnson. “We knew when qualifying ended and we were in P2 that we would have a chance entering the race to do well.”

“After a quick start, we came into our driver exchange halfway through the Continental Challenge race in P1. Unfortunately, our team had a miscommunication and some issues coming out of the pit and that hurt our chances of taking the checkered today. My co-driver, Stephen Simpson, kept us competitive for the top 4 finish. We look forward to a strong outing at our next race at Watkins Glen in June.”

Johnson, who was paralyzed from the waist-down in a motorcycle crash at the age of 12, has raced in the open-wheel ranks and Continental Tire SportsCar Challenge in specially equipped race cars with hand controls.

Johnson and Simpson will be back in action from June 28-July 1 at Sahlen's Six Hours of The Glen at Watkins Glen International in Watkins Glen, N.Y.