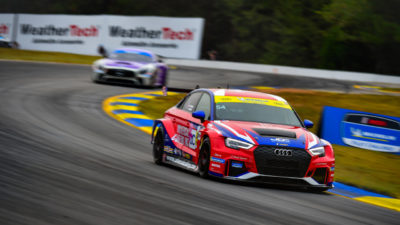 BRASELTON, Ga.  – Michael Johnson and Stephen Simpson, co-drivers of the No. 54 Universal Coating Audi RS3 LMS TCR car, and the JDC-Miller Motorsports team will look to finish the 2019 IMSA Michelin Pilot Challenge season strong when they race in this week’s Fox Factory 120 at Michelin Raceway Road Atlanta in Braselton, Ga.

“I’m very excited to finish the season strong here at Michelin Raceway Road Atlanta,” said Johnson. “We had some trouble at the last round in California, so I’m hoping this race is much smoother. Our driving had been strong all season, so we’re ready to win it.”

When last behind the wheel, Johnson and Simpson were once again hit by hard luck, as the team was forced to withdraw from the WeatherTech Raceway Laguna Seca 120 in Salinas, Calif. as a result of an incident. Running in fifth place, the No. 54 Universal Coating Audi RS3 LMS TCR car, with Johnson at the wheel, was hit from behind and in the left front, which led to a broken axle and effectively ending the team’s day.

Johnson and Simpson ended the 2018 season on a high note at Road Atlanta, placing second at the Fox Factory 120. The race was highlighted by the team’s best pit stop time of the season (1:30.212).

Road Atlanta is a 2.54-mile, 12-turn world class road course situated on 750 park-like acres in the rolling hills of Northeast Georgia, just 35 miles north of Atlanta. The Fox Factory 120 is a part of the 22nd Annual Motul Petit Le Mans, a four-day event of on-track battles.

Weather does not look to be a factor, as the forecast on race day in Braselton is calling for sunny conditions with temperatures in the low 80s. Winds are expected to be from the south-southeast at three miles per hour.

“I am looking forward to getting underway,” said Simpson. “We had a good race at Road Atlanta last year, with Michael and I finishing on the podium. We are still looking to go a little better this time and are looking for that elusive first win this year. We feel good and we feel like the JDC-Millersports guys have done a great job preparing the car. Michael and I have done a lot of prep for this weekend and can’t wait to get started.