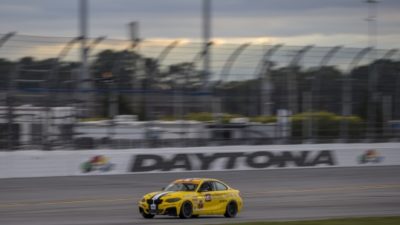 Johnson and team to race in BMW Endurance Challenge at Daytona

The paralyzed driver and his team are taking on the BMW Endurance Challenge at Daytona, an IMSA Continental Tire Sportscar Challenge race that’s four hours long and offers fans the chance to watch their favorite drivers prepare for the Rolex 24 at Daytona in the years to come.

“This is my first time at Daytona and I couldn’t be more excited,” the former motorcycle champion Johnson said. “Our BMW 228i M Sport started running great, right off the truck. My hand controls from GuidoSimplex are working very smoothly and we learned a lot from testing a few weeks ago.”

Johnson’s car is specially-designed with hand controls for braking, shifting gears and manipulating the throttle, due to the driver being paralyzed from the mid-chest down. Because his car has to be specially modified, he was unable to compete on the 3.56-mile Daytona track last season, as it wasn’t ready in time.

“This will be the longest race of my career,” Johnson said. “I’ve been training very hard in the off-season with my trainer, Josh [Gibbs], and my teammate, Stephen [Simpson] to prepare. The field sizes for both classes are impressively large so the action should make this race very exciting!”

The season will conclude Oct. 4, 2017, at Road Atlanta in Braselton, Georgia, which will complete a 10-race schedule.