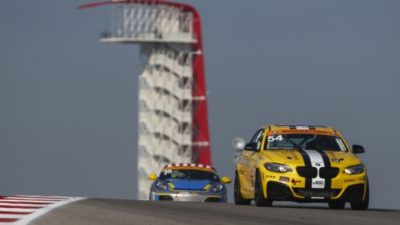 JOHNSON SET FOR AUSTIN RETURN IN SPORTSCAR SHOWDOWN AT COTA

AUSTIN, TX, May 4, 2017 – American paralyzed BMW driver Michael Johnson & JDC Miller Motorsports will race in the Advance Auto Parts Sportscar Showdown at the Circuit Of The Americas in Texas for the Continental 150 this Fri., May 5. The track marks the first return course for Johnson after making a switch to sportscar racing beginning in 2016.

“The guys have been working really hard back at the shop and after a couple tests, we are excited to see how far we’ve come,” said Johnson. “This is the third race of the season and we are still looking for that groove to build some momentum on. This is the first repeat track I’ve raced at from last season, so it’s a great place to start.”

The Advance Auto Parts Sportscar Showdown opens with practice on Thurs., May 4 at 12:40 p.m. with an additional practice session later in the afternoon to close out the day. Qualifications will take place on Fri., May 5 at 11:15 a.m., followed by the  two-hour and forty minute race at 2:45 p.m. (all times Central).

Johnson and Simpson are behind the wheel of the #54 BMW in the Street Turner (ST) class. The BMW is specially designed with hand controls for braking, shifting gears and manipulating the throttle, to accommodate Johnson being paralyzed from the mid-chest down.

All of the 2017 CTSC races will be televised on a tape-delayed basis by FOX Sports. However, it will be streamed, live, on IMSA.com and on IMSA's mobile app.