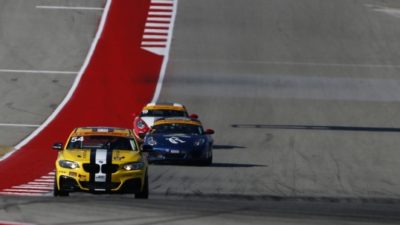 “I'm very exited to run for the first time at Circuit of the Americas this weekend,” said Johnson. “With this being a Formula 1 track, it's very fast and flowing. Hopefully we can continue all the hard work on this BMW 228i M Sport and come out with a good result!”

The Michigan native’s first visit to COTA comes on the heals of strong results in the two previous race weekends, where he has continued to build momentum and cement his transition to SportsCar racing. COTA is a 3.4-mile, 20-turn road course with an elevation change of 133 feet (41 m) with the design of the course inspired by the European tradition of sculpting the circuit to the contours of the land. The race will hold its challenges for Johnson and his co-driver, Cape Town South Africa’s Stephen Simpson, but with a weekend off this past week, both are well rested.

The ninth round of the 2016 Continental Tire SportsCar Challenge season will see practice continue Thurs. Sept. 15 morning with qualifications set for the afternoon at 1:35 p.m. The race will be contested on Fri., Sept. 16 at 12:40 p.m. All times of Central.