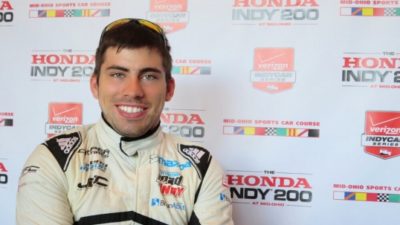 “Overall this weekend was not bad,” said Johnson. “It’s my first race weekend back since my injury and I think it could have been a lot worse. I’m glad that the car ran fairly well minus the few glitches.”

While Johnson had stated during an interview with USA Today prior to the race weekend that his goal for the weekend was a pair of top-10 finishes, he also admitted bringing the car home with four wheels on it and recording as many laps as possible was a priority. Over the course of two days of practice sessions as well as qualifications, Johnson was the busiest driver on the course in nearly every session. The Michigan native kept telling his crew he needed to put laps down and focus on getting quicker around the 2.258-mile, 13-turn road course.

With the rest of the field having 14 races under their belts, Johnson joked that he felt like a rookie again; arguably he was. 2015 was to be Johnson’s second full-season in Pro Mazda prior to an incident during the first practice session of the 2015 season in St. Petersburg, Fla., in March. Following the crash, Johnson spent nearly three weeks at a Florida hospital that involved surgery and a lengthy road back to the racetrack trailing the fractures to his hip and pelvis during the crash.

Both Mid-Ohio races for Johnson didn’t go quite as he had planned. During Race #1, he battled a push in the front end, while Race #2 included a loose car and difficulty with his clutch, negating his chance to race as aggressive as he had hoped. Race #2 seemed like his best opportunity to shine. When the green flew early Sunday morning, it was then quickly waved off. During the second re-start, Johnson passed three guys into Turn 1—which is Turn 4 at Mid-Ohio. Just as he was getting some momentum, he started to have a clutch issue that developed throughout the race. It was slipping every time he’d shift or get on the throttle, which made it difficult to get to power off the turns.

“I can’t thank everyone enough for setting this car up, especially my mechanic Scott Church,” said Johnson. “From Team Owner John Church to everyone that has been involved in getting me back out there. From management getting my sponsors to stick with me to my trainer Josh and of course my family for all the support. It has been a long road and I just felt so welcome this weekend. The series even threw me a reception after the first day of practice and at the autograph session the fans were really uplifting.”

The final two races of the 16-round 2015 season will be contested at Mazda Raceway Laguna Seca in Monterey, Calif., on September 11-13. The two races at Laguna Seca will only be Johnson’s second race weekend back on the track, which gives the driver little time to prepare and really get up to speed.

“I still have a long journey ahead of me,” continued Johnson. “I’m at a slight disadvantage to the level all the other drivers who have raced all season long are at. However, I’m really excited for Mazda Raceway Laguna Seca. It will be nice to get back out there and work on my racecraft and get me up to speed so I’m ready to go for next year.”

The 22-year-old native of Flint, Michigan, drives for JDC Motorsports in the No. 54 Universal Coating entry. He is the first and only paralyzed driver licensed by INDYCAR to compete in the series’ developmental ladder system, Mazda Road to Indy, which prepares drivers for the VERIZON IndyCar Series and Indianapolis 500. Johnson drives a specialty-equipped racecar with hand controls.