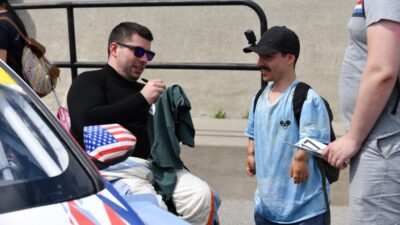 BOWMANVILLE, Ont. – Drivers Michael Johnson and Stephen Simpson, at the wheel of the No. 54 Universal Coating Hyundai Elantra N TCR car, and the Bryan Herta Autosport (BHA) Team raced to a 10th-place finish on Saturday at the Canadian Tire Motorsport 120 in Bowmanville, Ont.

“This past weekend at CTMP was a difficult one,” said Johnson. “This track is always challenging with its high commitment and fast corners. I felt like we were driving well and had a good car; just weren’t able to get the result we all wanted. I am looking forward to Lime Rock Park next week. Big thanks to the entire BHA crew and everyone else involved.”

The race marked the first time since 2019 that the IMSA Pilot Challenge series returned to the Canadian Motorsport course. The 2020 race was moved to the United States, to Watkins Glen, N.Y., because of COVID-19 concerns and international travel restrictions.

“Michael did a great job, qualifying .8 of a second off pole position, so he continues to improve in a very competitive field,” said Simpson. “His start and his stint were very good. He was under pressure from some other cars, but he did a great job.

“Ultimately, it was a disappointing result for us. We still need to analyze where we lost a bunch of time. Our setup of the car wasn’t quite where we needed it to be, which made it a little tricky to drive in the race. Nevertheless, we came away with some points. We are putting our head down and looking ahead to the next race, which is one we have won before. Michael and I are both very excited for that.”

Following a week off, Johnson, Simpson and the BHA team will venture back to the east coast, as they travel to Lakeville, Conn. for the Lime Rock 120, part of the FCP Euro Northeast Grand Prix.