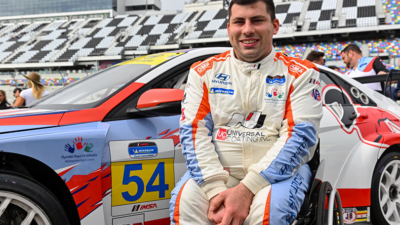 Results are not always indicative of effort and performance.

Such was the case for drivers Michael Johnson and Stephen Simpson and the Bryan Herta Autosport (BHA) team on Friday afternoon in Daytona Beach, Fla. at the BMW Endurance Challenge, the opening event of the 2022 IMSA Pilot Challenge season.

Johnson and Simpson navigated the Universal Coating No. 54 Hyundai Elantra N TCR car to a sixth-place finish at Daytona International Speedway, ending the team’s streak of three-consecutive podium finishes at the famed track. The team was leading for much of the second half of the race, including with less than just 10 percent of the race remaining, but an assessed drive-through penalty derailed its chances of a top three finish or victory.

“The race at Daytona had some highs and lows, but we learned a lot,” said Johnson. “Bryan Herta Autosport set up an amazing car that handled very well. I had a pretty good stint, bringing the car in for the driver change in fifth. Stephen got in and does what he does best. We unfortunately had a penalty on pit lane while in the lead late in the race. We ended up sixth but gained some valuable points.

“I feel really good in the car and looking forward to the next race at Sebring in March. I want to thank Bryan Herta Autosport for all their hard work on the hand controls and their professionalism. I’m very excited to get racing at Sebring and get that much deserved win!”

The race was the debut of Johnson and Simpson in the Elantra N car after driving the Hyundai Veloster in its first season of racing with BHA.

“Overall, it was a very strong start to our season,” said Simpson. “The sixth-place finish definitely did not reflect the effort that our team, Michael and I put in. We were leading a lot of the second half but unfortunately had to serve a drive-through penalty while leading the race with 18 minutes to go. That really hurt and was a tough pill to swallow.

“There were lots of positives to take away. Michael’s speed was fantastic. I think he had the sixth-fastest lap time out of 35-40 drivers. That is huge progress by Michael. The car was really, really good. There are big things to come. I am really excited for the rest of the year. This definitely lit a fire under us knowing what a great car we have. Now, we just have to put that potential into actual results.”

Johnson and Simpson will be back on the track in the Universal Coating No. 54 Hyundai Elantra N TCR car on Thursday, March 17 (4:25 p.m.) for the Alan Jay Automotive Network 120, the next race on the Michelin Pilot Challenge schedule. The two-hour race is held at the 3.74-mile, 17-corner Sebring International Raceway in Sebring, Fla.