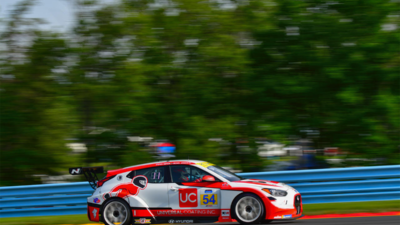 The event, which saw Johnson and Simpson finish third among Hyundai Veloster N TCR entries, was the fifth installment of the 2021 IMSA Michelin Pilot Challenge.

“The four-hour race at Watkins Glen was a bit of a rough one,” said Johnson. “We learned a lot and were at a good pace but had a mechanical issue towards the end. We will regroup and be ready for the next race on Friday. The entire BHA crew did a fantastic job, so looking forward to getting back in the car.”

The 2021 Tioga Downs Casino Resort 240 was marred by cautions, stoppages, accidents and delays. The early hours of the race were marked by significant incidents that could potentially knock teams out of competition for this weekend.

“All in all, it was a tough weekend and end to our race,” said Simpson. “We were running strongly and led the race for a part of it. We were in the top three for the majority of the four hours but, with about 20 minutes to go we had mechanical issue; fuel pump-related, I believe. We had to make an additional pit stop and that put us out of contention.

“It was a disappointing end for sure. A lot of hard work went into it from the team’s side, Michael’s side and my side. Michael drove very well; he kept us in contention and made some good overtaking maneuvers. It was disappointing four-hour race but we only have to wait six days to be back on the track at Watkins Glen and give it another shot.”

On short turnaround but with no travel on the docket, Johnson, Simpson and the BHA team will return to action at Watkins Glen International Speedway this weekend, as the iconic track is set to host IMSA events in back-to-back weekends. The WeatherTech 240, which was originally scheduled for Canadian Tire Motorsports Park in Ontario, Canada, will be held Friday, July 2. The event was moved from because of the COVID-19 pandemic and international travel restrictions.