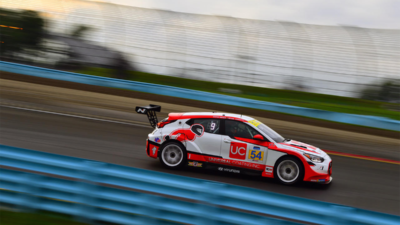 WATKINS GLEN, N.Y. – Racing at Watkins Glen International Speedway for the second consecutive week, drivers Michael Johnson and Stephen Simpson and the Bryan Herta Autosport (BHA) team placed fifth in the TCR class at the Sahlen’s 120 at The Glen on Friday.

The event, which saw Johnson and Simpson finish fourth among Hyundai Veloster N TCR entries, was the sixth leg of the 2021 IMSA Michelin Pilot Challenge.

As forecasted, weather played a role in the running of the race, as rain showers soaked the track surface for the last quarter of the two-hour event.

“This weekend, at Watkins Glen, was a challenging one,” said Johnson. “With the changing weather conditions, it made it difficult to get a feel for the track. The entire BHA crew worked hard and Stephen drove very well. We will regroup and head to Lime Rock Park in a couple weeks.”

Johnson and Simpson, behind the wheel of the BHA Universal Coating No. 54 Hyundai Veloster N TCR car, posted a best-lap time of 1:58.401 and their top speed was measured at 103.377 miles per hour.

“All in all, this weekend was a disappointing result,” said Simpson. “It didn’t play out our way. Michael had a good qualifying effort; he was the closest to the pole position as he has been all year. That was definitely a positive. It rained towards the end of the race. I think if the race had gone on another 10 or 15 minutes, it would have gotten very interesting. What we needed was a safety car for the last 30 minutes of the race. That would have bunched everyone up and provided an opportunity we didn’t really have. So, we are on to Lime Rock Park in a couple of weeks.”

In two weeks, Johnson, Simpson and the BHA team will travel to Lakeville in northwest Connecticut for the Lime Rock Park 120 at historic Lime Rock Park on July 16-17. The two-hour race, which Johnson and Simpson won in 2018, is scheduled to go green at 11:05 a.m. on Saturday, July 17.

Built in 1956, Lime Rock Park, which features a circuit length of 1.50 miles, is the nation’s oldest continuously operating road racing venue. It was listed on the National Register of Historic Places in 2009.