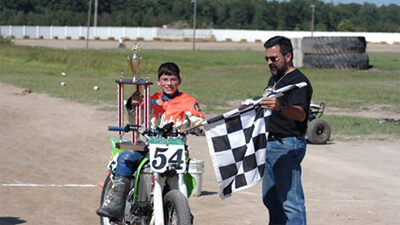 15 years. A lot can transpire in decade and a half. For Michael Johnson, that certainly has been the case.

Recently, the calendar marked the 15th year since that fateful day in 2005 when his life changed forever. When, during a flat track motorcycle race in Canada, Johnson went over the wall on a turn, breaking his back and paralyzing him from the mid-chest area down.

Johnson doesn’t want to necessarily call the remembrance of that day, which still remains vivid in his mind, an anniversary. The tone just doesn’t quite fit. He prefers to envision it as something else.

“I look at it as a Happy Life Day. It feels like it has flown by. There have been some rough patches along the way, but I wouldn’t change it (the last 15 years) for the world.”

What could have been a tragic ending developed into a new beginning for Johnson. Undeterred by the ill-fated events, he vowed from his hospital bed to race again.

Johnson has been true to his word.

A part of the JDC-Miller Motorsports team since 2011, Johnson has piloted the No. 54 Universal Coating No. 54 Audi RS 3 LMS TCR car to the pinnacle of the IMSA circuit.

Johnson has won the pole position at Daytona International Speedway, one of the most famed and revered racetracks in the world. He has also earned a spot on the podium there. In 2018, he finished the season with one title-win (at Lime Rock Park in Lakeville, Conn.), four runners-up, two third-place finishes and two fourths, placing fifth in the points standings for the 2018 championship of the Continental Tire SportsCar Challenge (TCR class).

Johnson’s success has not been achieved alone. He has partnered with co-driver Stephen Simpson, a passionate and gifted South African with 70-plus professional race wins, to make their mark in the IMSA world.

Along the way, Johnson has received a variety of support. In 2009, he traveled halfway across the world, to Lisbon, Portugal, to have revolutionary stem cell surgery. Johnson currently follows an aggressive physical therapy program, devised by his trainer Josh Gibbs, with whom he has worked with for the past 12 years. Of course, his family has always been in his corner and his rock-solid foundation.

There have been bumps in the road, as there always is. No journey on the path to success is complete without them. In 2015, Johnson broke his femur followed by a shattered leg in 2018. But he has bounced back. There have been untimely, frustrating and uncontrollable incidents on the track that have derailed prime opportunities for top finishes. But he has remained undaunted.

Off the track, there have been many highlights. For his impressive career and athletic determination, Johnson was inducted into the Athletes with Disabilities Hall of Fame and received the Spirit Award in 2012. In 2014, Disabled Sports USA awarded him a scholarship to train with members of the U.S. Paralympics Alpine Skiing National Team. To inspire others, NASDAQ featured him as part of their “Ignite Your Ambition” holiday campaign in NYC’s Times Square in December 2014.

On the personal side, life is good as well. Johnson has been able to further his education by attending college. He met the love of his life, Noor, and made her his wife three years ago.

15 years. In the end, it’s just a number. But it’s what it represents to Johnson that matters. More than half of his life dedicated to what has meaning to him – family and friends, pride and perseverance, speed and success.

What will the next 15 years bring? No one knows for sure, but Johnson will most assuredly keep pushing the limits and keep moving forward, pedal to the metal.